Sorry for the lack of updates, we were really busy with doing a lot of stuff.
One of those stuff, is our preparation to Gamescom ( aka what happens after GDC-europe conference ), the rest is just all fancy-pantsy graphics update for our game but we’ll leave that for later.

At first it sounded like a really great opportunity, it didn’t cost that much nor did cause many problems for us since Germany is pretty close to Belgium.
But as we dove deeper into how we were going to set things up, we stumbled upon a unexpected entity :

USK or “Die Unterhaltungssoftware Selbstkontrolle”.
Here’s what they represent, taken from their website :

“USK is the German abbreviation for the Entertainment Software Self-Regulation Body, an organization which has been voluntarily established by the games industry. It is the officially recognized institution responsible for the classification of computer and video games in Germany in accordance with the Children and Young Persons Protection Act (JuSchG) as well as for online contents in accordance with the Youth Media Protection State Agreement (JMStV).”

“No matter how kids friendly your game is, it has to be rated in order to be sold or shown publicly in Germany, or else you’re good to face the fines.”

Now, maybe that doesn’t sound that bad to the consumer, as it’s helps people differentiate a game that’s super violent or sexual from one that’s safe for kids. But for us, indie developers, this thing is a huge sword that pierces our poor armor-less wallet.

Our original plan was to present AfterLoop and A Wild New World at our booth, but just for getting ratings for those games and game materials, it would cost us around €1,800. Forcing us to reconsider our plans.

( You can find the full price list here : http://www.usk.de/en/extramenue/login/publisher/material/cost-overview/ )

Without counting the price we had to pay for a shared booth space there ( with help of startups.be ), it’s still a lot of money for a rating that’s only useful in Germany and that can be obtained for FREE through IARC.

And this is just for Gamescom, so if you want to publish your game in a retail store ( if IARC isn’t available), you have to go through this process again and pay more. 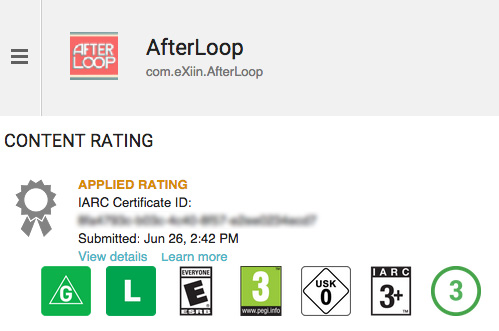 What’s IARC?
It’s a new global ratings system that provides USK rating along with other country ratings for free currently on certain stores such as on Google Play and Firefox marketplace.

Although, guess what, IARC’s given rating ( even if it provides a valid USK rating ) is not approved at Gamescom, so you can’t use it at all.

You might think that the business area for showing off the game wouldn’t need any ratings, but nope, that’s not the case either. You have to go through USK to get a rating for all public materials.

It’s kind of odd for us, since all of our current games are meant for all ages.

What choices does it leave us?

We’re waiting impatiently to find out what kind of rating a game where you push blocks might end up with, let’s call the experts 🙂